L'art de la conversation: How to have Genteel Conversations in French Style

The French, more than many other cultures, have created a culture of good conversation. As a nation that literally created the language of love (amour), the French are great teachers in the joys of conversation without being confrontational which is often the case in American 'argument culture'.

Historically speaking, this oral culture can be traced back to the salons of the 18th century. While the same settings no longer exist today, this culture of lengthy dinners in the city, colloquiums and debate clubs is still very present today in France. Eloquence is something of a bargaining chip in French culture. - The Bonjour Effect: The Secret Codes of French Conversation Revealed, by Julie Barlow and Jean-Benoît Nadeau. 2016

We found that by creating a good-natured atmosphere of bonhomie, we can have honest enlightening conversations about sexuality, where we leave feeling energized rather than the 'attack politics' that currently dominates so much of what passes for discourse in conversation today.

In homage, we try to create a French-influenced style of communication in our discussion groups, where we can enjoy l'art de la conversation. The joy of great conversation with intelligent people about a subject many of us are passionate about, sex.

Using French Expressions and Art of Conversation in English 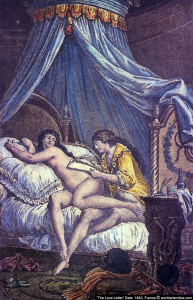 As a historical fact, in matters of love or diplomacy, the French created such wonderful words of subtle (French) communication, that they are used in English.

By showing the sheer French range and influence on the English language in matters of love and communication, we pay homage to the French art of conversation to open civilized discourse.

Here are some examples of original French words in diplomacy and communication which are now used in English. Original English was a clunky language without finesse. So it literally had to borrow words from the French to communicate clarity and detail with élan.

French words and expressions of love or sensuality now used in English:

And of course, where would we be without a French kiss 😉

When you are able to have open and free discussions about sexuality, race, gender, orientation and other 'trigger' subjects, you can enjoy many benefits: