The Way it Is: Sex Workers & Business in the World Today

There are very few companies in the world that deal with sex in a way that is beneficial to sex workers, society, or the planet. The idea of making money through sexuality is automatically seen as 'dirty' or 'sleazy'.

Most companies that deal with sexuality today are in the following categories; pornography, strip clubs, escorts, and prostitution. All tend to have negative reputations and strong associations with exploitation and criminality.

The overwhelming majority of sex workers are female or transgender women who suffer from all kinds of discrimination or persecution. They are penalized by society and can be abused, trafficked, raped, and commodified in ways that make the phrase 'sex industry' more ominous than positive.

There are men who work in the sex industry. However, they are usually the 'owners' or 'managers' of sex businesses rather than on the 'service' side.

The sordid aspect of modern 'sex work' is hard to shake. Sex work is often conflated with 'sex slavery' and 'sex trafficking'.

One reason for this is that most forms of sex work are judged as immoral and illegal in much of the world. As a result, sex workers are unable to receive the benefits that most members of society take for granted such as police protection, licensing and regulation, access to health insurance, business insurance, and banking services etcetera.

The new Sesta/Fosta laws signed by President Trump have further criminalized many forms of sex work as well as the internet sites that support their services.

Without oversight and government regulation, sex workers are forced underground. This is where the most disturbing crimes of sexuality take place.

Though it may be difficult for many to believe, not every sex worker is 'only doing it for the money' or is 'doing it against her will'.

Many sex-positive females are happy in their chosen profession as a Sex Worker.

They have made a conscious adult decision and enjoy the perks and benefits that come from working with sexuality:

b) Financial Benefits & Working Hours. There are Sex Workers who are in control of their income and choose their profession. They can often have pay and working hours that are better than many of the work options that would normally be available to them. This is especially true if they have low skills or education.

c) Creating Marital Stability. "for many couples, businesses in the sex industry are a source of information, titillation, products, or services that enhance and add variety to their love lives. The result can be a “walk on the wild side” that makes their relationship more interesting and fun, and brings them closer together." Humanist

d) Providing Social and Intimate Companionship. "Sex workers often provide companionship for people who don’t otherwise have it. The reasons for the customers’ loneliness are frequently beyond their control. They may be too disabled, unattractive, shy, socially inept, turned-off by pick-up or dating games, tired of rejection in the normal dating scene, otherwise unsuccessful at dating, or just plain too busy with school or careers." Humanist

e) Sex workers support our troops and industry. They have provided morale boosts for men performing important work in other environments where males greatly outnumber females, such as near U.S. military bases or mining towns. 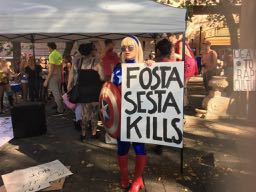 One problem working with sexuality is that it is one of the most legally regulated aspects of human behavior. In countries from Sweden to Saudi Arabia, many forms of paid sexuality between consenting adults are illegal.

For example, sexual surrogacy is a form of sexual healing. A Sexual Surrogate would be a great example of an EcoSex Entrepreneur. However, despite the personal and social health benefits it brings to clients, in most of the world, sexual surrogacy is classified as prostitution and is therefore illegal.

While the law does forbid most work with sex-positive work, it is not that way all over the world. For example in Amsterdam prostitution is legal. So a Sexual Surrogate could practice their business there! Portland, OR is the Polyamory capital of the world so that would be a great city to do any sort of business that deals with open relationships.

In other words, there are tiny oases around the world where different forms of sex work are legal or decriminalized. Legal uncoerced sex work is increasingly recognized even by some feminists as a profession that can bring personal and societal benefits.

3) Broadening the Definition of 'sex work'

Sex Workers are the ideal candidates to be EcoSex Entrepreneurs because they are already 'in the sex business'. EcoSex Entrepreneurship allows you to make a living from creating the change that you want to see in the world. it is something you can do well into old age. As long as what you are doing is helping society or the planet in some way and it is making an income then it is sustainable.

As well, there are many imaginative and fun ways to work with sexuality. After all, sex is about pleasure.

This website offers ideas and resources for those who want to work positively in the field of sexuality. It is for those who enjoy working with sex but in a way that improves peoples' lives in society rather than exploiting them.