In our alternative look at sex, violence, free speech, and feminism, a Warrior Woman approach is a simple approach.Empowering to women to defend themselves is more understandable to men than the current focus on victimization that is a product of mostly American universities but is affecting women in the world. 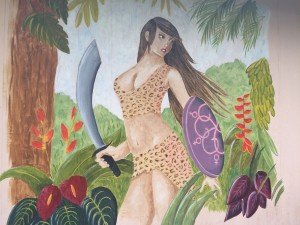 Women around the world spend the majority of their lives feeling pressured, targeted, and tormented. In some cultures, female-targeted violence reaches graphic extremes. Why are women always the victims of aggression? Females tend not to rape, abuse, or murder men. When it does happen it is so noteworthy it often makes a story in the press.

Rather than learning to defend themselves, from a young, impressionable age, girls are taught to wait for a man to come and save them. Many fairy tales and movies tell of a beautiful damsel in distress, waiting for the impeccable timing of a Prince Charming to swoop in and save her. Young women are taught to regard themselves as fragile and delicate as opposed to celebrating female physical power.

In fighting for women's rights there have been unintended and unforeseen consequences. One of them is known as "Fainting Couch Feminism," college educated women who are fragile and sensitive to "micro aggressions", toxic masculinity and rape culture. Rather than celebrate the real gains made from feminism giving women the right to vote and equality under the law they instead try to criminalize many aspects of masculine behavior. College students in America and Western universities are some of the most protected women with a greater possibility of realizing their dreams than any other women on earth. Yet these women need "safe spaces" on campus every time a speaker comes whose words they equate word with violence

As a result, many men around the world see feminism opposing masculinity. They see the movement treating women as victims to be protected. This perpetuates a disempowering victim mentality among women.

A woman who makes love out of desire, not duty is a woman who is not under the control of men. At present, there are very few places in the world where women have that kind of sexual equality. The countries of the West are still the most advanced in terms of women's rights and it shows in the sexuality of Western women who are free to enjoy themselves in ways that they choose.

This is not only an idea for women, hence Warrior WoMan. Men have traditionally been seen as the protectors not the nurturers. However, inside every woman is a man and inside every man is a woman. The amount we share of each other is on a spectrum.