The Way it is: Female Inequality in Law & Politics

Women's legal and political empowerment is enshrined in international law. However, whether it is in Islamic Sharia Law or Western jurisprudence, women are still legally discriminated against in a majority of countries in the world.

If anyone thinks that the Western countries are so advanced when it comes to women's rights it is good to remember how men reacted in the 19th century to the Suffragette Movement of women fighting for the right to vote.

Many Muslim-majority countries are not democracies, so issues of voting do not apply. Strongly conservative and patriarchal beliefs about gender roles are taken very seriously in Islamic societies. Even in the West, where Muslim women have the same legal rights as men, they have been prevented from exercising those rights by their male relatives.

Female violations of modesty laws are frequently met with violence in Muslim countries. In Muslim-majority countries such as Saudi Arabia, women are advised to dress modestly and not to travel unaccompanied by a man. Dubai has notoriously strict public indecency laws.

Other examples of legal discrimination against females under Islamic Sharia law:

The Way it Could Be: Giving women the legal and political tools for gender equality.

Women need the legal authority and training to carry appropriate weaponry to 'equalize the playing field' in terms of their physical disadvantages compared to men. For example, women should have a legal right to carry 'defensive weapons' such as pepper spray, mace, guns, tasers. Many women and men can work in the legal field to defend women who defend themselves.

If a woman kills her rapist or a wife kills her abusing husband, women everywhere should flock to her defense. Asylum and refugee status can and should be given to women who do so in traditional countries and then face male judicial wrath.

Power in numbers. Men have physical strength. But in India, the Pink Sari Revolution has shown that women can unite and fight back politically and physically against men who abuse and rape them. Much more effective than waiting for the (male) police and male-dominated judicial system especially in patriarchal traditional countries.

Politics by Other Means. From the very beginning of the women's movement, females literally had to fight for their legal rights. 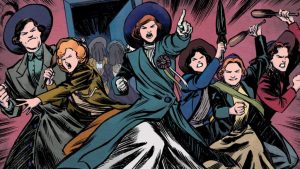 'Suffrajitsu': How the suffragettes fought back using martial arts

The suffragettes were exposed to violence and intimidation as they campaigned for votes for women. So they taught themselves jiu-jitsu.