Ecofeminism makes a connection between gender equality and the environment. It equates the treatment of women on the planet with the treatment of Mother Earth. The unequal status of women has a cost to the entire world. Studies have shown overpopulation, war, and environmental degradation, are largely male induced and supported activities.

Population growth and the overuse of natural resources is often cited by many experts as one of the greatest causes of environmental degradation. There are simply too many humans for the planet to sustainably support.

However, to take any step to 'reduce' the human population would involve possible crimes or ethical violations. When a woman has a job, education, and equality, she will choose to have is 0-2 children. This tends to be true no matter what country she is from. In other words, feminism will solve the population problem which is good for the environment!

Ecofeminism equality does not mean being the same! 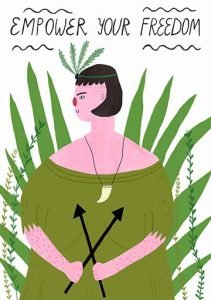 If there ever were a historical trial held for all the wars, genocides, drilling, mining, clearcutting, torture, rape, and the many other abominations in human nature, the docket would be composed almost exclusively of men.

By that fact alone, men have abrogated their responsibility as stewards of the planet. Women are literally not guilty of most of the major crimes in this planet's history.

Macho posturing on the world stage between egotistical, prideful men of power, is often the cause of war. Having a critical mass of women in positions of leadership and power would change many of the underlying fundamentals that make men go to war.

Since the beginning of recorded history, men have been waging an unofficial war against women. To those who may doubt this as hyperbole, simply look at the body count. Every year millions of women are killed or raped across the globe. The equivalent simply does not happen to men. There are no 'Battered Men's Shelters' anywhere in the world. Men don't fear women. But women have learned to fear men.

Female persecution transcends race, creed, and culture. And men do the same to Mother Earth. They drill, mine, deforest and hunt to extinction all other life on the planet.

Broadly speaking, women tend to be less territorial, aggressive, and violent than men. This can have great benefits in matters of war and peace.

The Way It Is

Ecofeminism: To view Mother Nature and Women's bodies as one and the same. An ecofeminist has a focus on female environmental empowerment. Ecofeminism makes sociological observations on the connections between the abuse of women and of nature at the hands of men from all cultures throughout recorded history.

To be quite blunt about it, men rape women all over the world. In every culture, religion, or region. And men primarily are the miners, clear-cutters, drillers, and workers in other extractive industries that 'rape' Mother Nature. Not many women work in those industries except in the 'office'.

Whether it's a penis being forced into a woman's body or a diamond bit drilling into the earth, the results are the same. Men take what they want forcefully and then leave a mess afterward.

However, to continue the analogy 'drilling' can be pleasurable for women. So too, if care is taken, men can extract a certain amount from Mother Nature as long as he puts something back. A woman's body is never the same after she has been 'plowed' or 'drilled' by a man. So too with nature.

We are not advocating turning the entire planet into a sacred park where nothing can be touched. Responsible extraction creates products, services, and technology that can better both. After all, if one day a nuclear missile is used to 'save' the planet from a stay meteor what can even the most extreme environmentalist say?

'Femininity' is often seen as an urban creation. Many of the signs of modern femininity, whether mini-skirts or make-up, are common in a city. They are not so in a natural environment. With the increase in urbanization across the planet, many women feel very UN-feminine and dis-empowered in a natural environment. Often they need a 'man' to scare away the spiders or cut through the jungle foliage.

Being comfortable in wild nature does not mean having to give up your femininity! As a 'green tourist' community founded on Eco-Feminist principles, Hedonisia provides an opportunity for female volunteers and interns to become 'environmentally empowered' by working in nature and doing what is typically seen as 'man's work'.

Many city women who come to our community arrive as guests, volunteers, or interns. Often they are in a tropical jungle for the first time in their lives.

Living in the jungle can be challenging but it does make a woman feel stronger about her abilities in wild nature. And they take that feeling with them when they leave our community and return to the 'Urban Jungle'

A woman can feel empowered by living harmoniously with nature. Working, eating from, and even bathing from the land (our outdoor solar jungle shower), she will feel closer and more intertwined with Mother Nature than ever before.

By adapting to their surroundings and taking control, women are able to feel more confident in themselves and their abilities. Working with nature is not just a man's job, by any means. At Hedonisia, we hand a woman a machete on her first day and instill in her the faith that she can accomplish anything she sets her mind to. Once she finds that inner strength, nothing can stop her (especially not a few spiders).

By helping women feel self-assured in nature, we are giving her the mental mindset that she can do it without a man by her side; she will know that she is strong enough to take on anything the world throws at her! A woman can just as easily chop down a Guava tree and lead a team in building a structure with it. At Hedonisia, Women are able to embrace their strength and be appreciated for it. A damsel in distress is no friend of nature.

Females (or males!) may arrive at the Hedonisia Hawaii Eco-Community as a 'Prissy Princess" but they graduate as empowered 'Jungle Queens'.